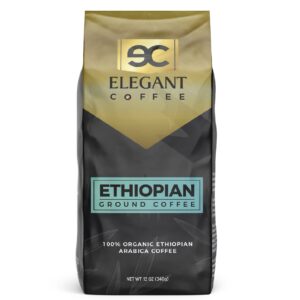 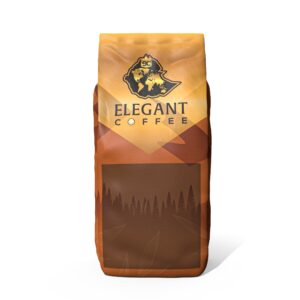 Earn 13 points upon purchasing this product.

The signature blend is a medium roast, carrying a robust aroma of coffee with a smooth taste in every sip that is sure to please. Every bag is 100% organic, Ethiopian, and roasted by our world class roasters.

Ethiopia is located in the horn of Africa and is bordered by Somalia to the Southeast, Djibouti to the east, Kenya to the south, Sudan to the east, and Eritrea to the northeast. It occupies the high plateau region between the Nile plains of the Sudan and Eritrea. Ethiopia is one of the largest countries in Africa with an area of over 1.13 million square kilometers. It has a rugged topography with altitudes ranging from around 100 meters below sea-level in the Danakil depression to 4,600 meters above sea-level in the Semien Mountains.
Ethiopia is the primary center of origin of the Arabica coffee plant. Coffea Arabica has been growing wild in the forests of the Southwestern Highlands of Kaffa and Buno districts of Ethiopia for thousands of years. As legend has it, coffee was discovered in Ethiopia in the 9th century by a goat-herder named Kaldi. He noticed that his goats became hyper after eating the cherries from the coffee tree, so he tried it himself. A monk approached Kaldi after he consumed the cherries and took some to his monastery. The monk roasted and brewed the coffee to share with other monks. As a result, they were able to stay awake during long nights of prayer. Since then, coffee has been widely accepted as a stimulant drink.
Ethiopia has over 70 ethnic groups that speak over 200 languages. As a result, coffee is referred to as Bunna (Amharic), Bun (Tigrigna), Buna (Oromifa), Bono (Kefficho), and Kawa (Guragigna). Some argue that most names for coffee are derived from the names of the districts Kafa and Buno. The French and Spanish call it Cafe, the Italians call it Caffe, the Germans call it Kaffee, the Finnish call it Kahvi, the Dutch call it Koffie, and the Greek call it Kafes. All are phonetic approximations of the Ethiopian word.
Yirgacheffe
The washed Yirgacheffe is one of the best highland-grown coffees. It has fine acidity, body, and flavor. Many people are attracted to its delicate, floral, and tea-like characteristics.

Use cold bottled or filtered water. We recommend one-two tablespoons of ground coffee for every six ounces of water. Simply measure and brew using you preferred brewing method.

The signature blend is a medium roast, carrying a robust aroma of coffee with a smooth taste in every sip that is sure to please.

Elegant Coffee has been delivering premium quality coffee since we opened in 2018. Our goal is to provide both a superior customer experience and tremendous value for our customers. Our Premium Blend was not only our first product, but an amazing seller that is loved by many!

Our partners in Ethiopia ensure every bean arrives safe, fresh, and ready to roast.

There are no reviews yet.

Earn 10 points by reviewing this product.
Be the first to review “Whole Bean 12oz” Cancel reply 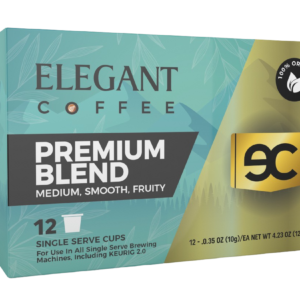 WANT 10% OFF YOUR FIRST ORDER? JOIN THE

Be the first to learn about our latest products, get rewards points and exclusive offers.